In May 2017, the first edition of the tri-national doctoral school was organised in Saarbrücken, Germany, with the participation of three universities. The following blogpost is a report of the event with some personal reflections.

Saarland is one of the smallest federal states in Germany and roughly the size of Luxembourg. Its capital, Saarbrücken, is situated only a stone’s throw away from the Franco-German border. The region’s eventful past can only be fully grasped when looking at it from a transnational perspective. Indeed, it was a suitable place to host the tri-national doctoral school, from 17th to 19th May 2017. This event, under the scientific direction of Dietmar Hüser (Universität des Saarlandes), Hélène Miard-Delacroix (Université Paris-Sorbonne) and Andreas Fickers (Université du Luxembourg) brought together more than twenty PhD students and researchers from the three universities. We could not only discuss our own projects, but also get in touch with our peers and exchange ideas.

Though a doctoral school had already existed before in a different format between the Université Paris-Sorbonne and the Universität des Saarlandes, it was the first time that the University of Luxembourg participated with six doctoral candidates from the Centre of Contemporary and Digital History (C2DH). While on 17th May, an informal introduction round took place which allowed the participants to get to know each other, the programme of the following days focused on presentations and group works. The doctoral school was officially inaugurated with a guest lecture by the eminent German historian Hartmut Kaelble, whose writings have not only enriched the field of social history, but have been strongly influenced by a transnational approach, too. In his guest lecture, he retraced the evolution of social inequalities, especially in France and Germany. Though this topic has already been tackled in his previous works (Kaelble 2007), he also discussed the perspectives that historians can provide in a field usually dominated by sociological and economic studies.

Breaking with borders in history

Kaelble’s lecture fitted perfectly within the framework of the tri-national doctoral school and its transnational orientation. Indeed, it is not a coincidence that the subject of the first edition, “Raumdiagnosen: Nationales und Transnationales”, focused on approaches to space and on transnational histories. Three PhD students had the opportunity to present their dissertation projects and research: Jürgen Dierkes (Universität des Saarlandes), Richard Legay (Université du Luxembourg) and Lise Galand (Université Paris-Sorbonne). Their subjects ranged from cultural history over political history to social history, but they all proved that looking beyond national borders is an excellent way to gain new insights. Jürgen Dierkes analysed triangular city-partnerships between France, the German Democratic Republic and the German Federal Republic. Richard Legay examined the importance of peripheral radio stations in pop culture in the 1960s and the coverage of the May 1968 revolts in France by Europe1 and RTL Radio. Lise Galand discussed Germany’s perception of the world from 1906 until 1914, as well as the tension between the ideas of globalization and encirclement (Umkreisung). These presentations illustrated how historians can transcend borders in their studies. Germany’s policies during the years preceding immediately the First World War cannot be understood without looking at the bigger picture of the international relations. The radio waves emitted by Europe1 and RTL Radio did not stop at national borders and it was precisely this aspect that played out in favour of these stations. The city partnerships between France and the two Germanys took place in the context of the Cold War and cannot simply be reduced to innocuous local initiatives.

The participation at this first edition of the doctoral school also made me think about my own research on the history of cultural policy in Luxembourg and how it can transcend geographical and epistemological spaces. Indeed, many aspects need to be contextualized in a transnational or supranational context, because of the dissemination of ideas or the international political contexts. Discourses on democratisation of culture and cultural democracy in Luxembourg in the 1970s were not a Luxembourgish invention: the democratisation of culture was a cornerstone of André Malraux’s policy, who was French Minister of Cultural Affairs from 1959 until 1969 (Dubois 1999, 218); the concept of cultural democracy appeared in the Declaration of Arc-et-Senans in 1972 (Max Fuchs 2007, 36–37). From 1969 onwards, cultural treaties were signed with communist countries, the Soviet Union being the first, thus transcending the Iron Curtain. Luxembourg’s audiovisual policy at the end of the 1980s was partly influenced by the Council of Europe’s European Year of Cinema and Television in 1988. The idea of the French ‘grands projets’ inspired the construction of new cultural institutions in the 1990s and 2000s, which should also help improving Luxembourg’s image internationally. These are only some examples showing that the analysis of cultural policy cannot be strictly confined within the borders of a country.

Writing transnational histories, looking beyond borders and transcending spaces are certainly not easy tasks, as historians can be confronted with many issues, such as the difficult accessibility of sources or the lack of language skills to understand them. Digital tools and platforms can be useful in this context, for instance by making sources available online with the necessary metadata, as in the case of Europeana and EUScreen, or using the advantages of crowdsourcing for translations. Regardless the issues encountered, studies in this field provide new insights and perspectives, and help in better understanding connections or discovering new links. The tri-national doctoral school is certainly a suitable format for exchanging ideas and, indeed, discussing on a transnational level. 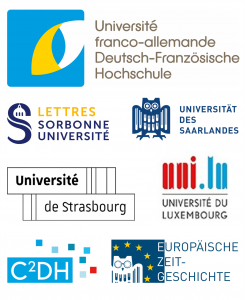